The head of a secret agency and her team must confront her past and an emerging threat that could alter the course of humanity – or perhaps already has.

A.L.L.I.A.N.C.E. is a new Science Fiction Drama Series in the tradition of The X-Files and Fringe, with a bit of Homeland thrown in for fun. It follows a team of NSA Agents as they become drawn deeper into a web of conspiracy, deception and cover-ups, all related to the mysterious UFO and alien abduction phenomenon.

But unlike shows of this kind that have come before, A.L.L.I.A.N.C.E. approaches the matter from the inside, exploring the dark world of abductees, covert operatives, and a secret worldwide cabal intent on protecting ancient discoveries from falling into the wrong hands, and saving humanity from a coming “purge”. 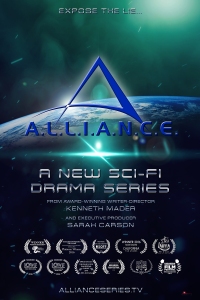